Last photograph taken of Alexander Mamkin, a few days before his last flights (context in comment).

Last photograph taken of Alexander Mamkin, a few days before his last flights (context in comment). 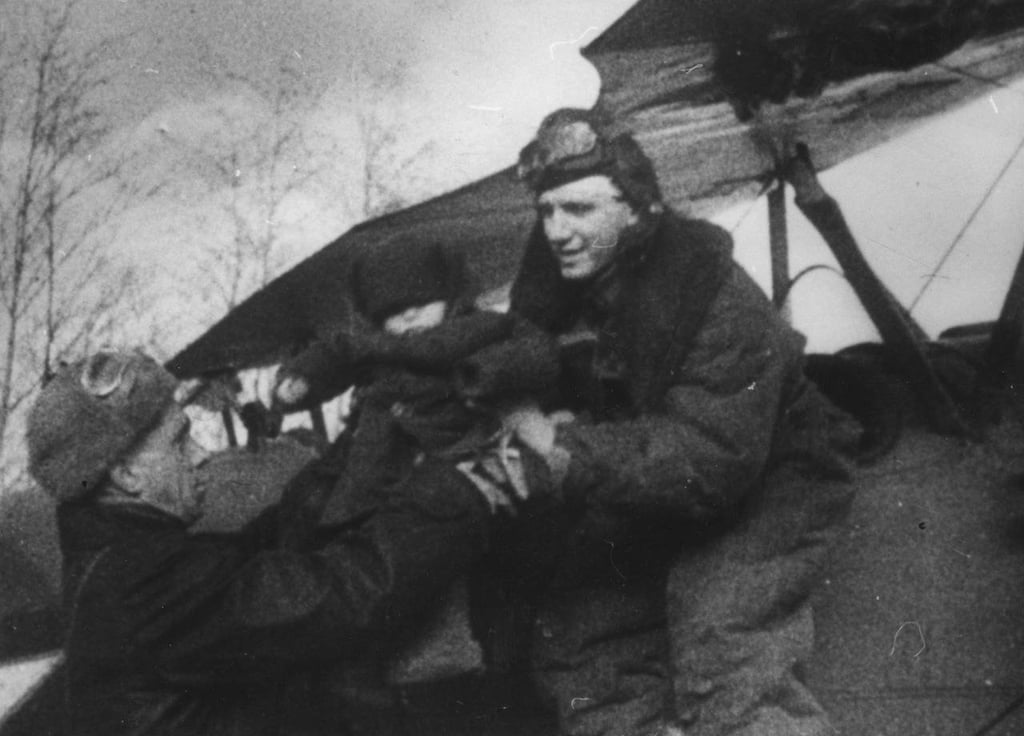 This is Alexander Petrovich Mamkin, he was a pilot in the Soviet air force during WWII. In Belarus, the Soviet partisans had a particular mission, to rescue the children of the orphanage No. 1 in Polotsk from Nazi captivity. What were the Nazis using these children for? (Die Kinder von Sokolniki: Blutspender für Wehrmachtssoldaten / [https://taz.de/!5177196/](https://taz.de/!5177196/)) The Nazis used them as blood donors (a direct blood transfusion to be more specific). The work of the Belarusian partisans in 1944 consisted of rescuing about 200 children and the teachers from the orphanage. They did it. The issue is also that they should get them out of there. In March a large scale military operation was started against the partisans, it was very dangerous for the children to be there. The partisans asked the command of the Soviet army if they could take the children behind the front line, behind the Soviet troops. The operation was accepted, and those in charge of this mission were the pilots of the 105th Guards Regiment of the Civil Air Fleet. Mamkin was among them. At the guerrilla airfield, organized on the ice-covered lake Vechelye, near the village of Kovalevshchina, south of Ushachi, children and wounded fighters began to be rescued several times a day. They got behind the front-line by pilots like Nikolay Zhukov and Dmitry Kuznetsov in Po-2 jets.Alexander Mamkin was in the most spacious R-5 plane. There were also other more specialized pilots for cargo missions. With the arrival of the German troops the operations had to be carried out at night, under German pressure. With the Lake Vechelye melting in the spring, evacuation had to be hurried as the ice was thinning. As of April 10, some 28 children remained under partisan protection surrounded by enemy lines. And on April 10 Alexander Mamkin made eight successful flights, the plane was always loaded with children. On April 11 another night flight was made, Mamkin had to evacuate 13 people. In the navigator's cabin, 7 children, in a special compartment under the fuselage, 3 children and a teacher, and in two removable aerodynamic containers suspended under the lower wings, two seriously injured adult combatants. But during this flight, Mamkin was discovered and the antiaircraft artillery attacked him. The plane caught fire. Mamkin managed to turn it off. Only for a German night fighter to attack him and set the plane on fire again. Mamkin received a wound to the eye. The thing is, Mamkin had 10 children on board, so he decided that he was going to land the plane. Fire spread through the cockpit, his clothes were on fire, his legs were burned and even his goggles melted. And still, Mamkin managed to land the plane. He arrived behind the Soviet lines in a flat area, saving 10 children, a woman and two guerrilla fighters. They were even able to get Mamkin out of the cockpit. Mamkin died a week later in the military hospital, April 17, 1944. In the evacuation flights he took out more than 90 people, including children, adults and guerrillas. And on other flights he delivered 20,000 kg of ammunition and took 280 wounded out of danger. Mamkin died at the age of 28, a volunteer at the front. He received the 1st degree Patriotic War Guerrilla Medal, Order of the Red Banner and 1st degree Order of the Patriotic War, and posthumously received the title of "Hero of the USSR". Fun fact, none of these congratulations came on his latest feat. In Polotosk (Or Polack / Polatsk), Belarus, there is a street named after him (Vulica Mamkina).They even made a documentary of the operation to save the children: [https://www.youtube.com/watch?v=hErTbUnva4s](https://www.youtube.com/watch?v=hErTbUnva4s)